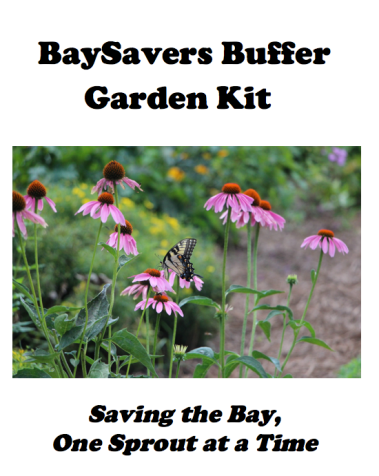 The BaySavers Buffer Garden Kit is a low-cost, easy way to help protect our waterways from polluted storm water runoff.

The Problem with Runoff

When it rains excess nitrogen, phosphorous, and sediment wash through the storm water drainage system into nearby waterways, ultimately ending up in the Chesapeake Bay. This stormwater runoff is not treated by any wastewater treatment plants. Sediment increases the turbidity (cloudiness caused by individual, microscopic particles) of the water, which smothers aquatic animals and plants; and the excessive nutrients create problems such as Harmful Algal Blooms (HABs).

HABs occur when algae grow out of control from consuming excess nutrients. Algae are simple plants that are an important base of the food web in marine ecosystems; however, when they grow too plentiful for the ecosystem they can harm the nearby fish, shellfish, marine mammals, birds and people. Algae can produce toxins that kill marine animals and cause human illness. They can use up all the oxygen in the water when they decompose, killing the life around them. They can also form piles on beaches that smell bad and contaminate drinking water.

Excess nutrients and sediment flowing through stormwater runoff into our water sources make it harder for humans to utilize the water for all the things we enjoy such as drinking, bathing, washing, recreation, growing food, manufacturing, and maintaining a healthy ecosystem.

As cities and farmlands have been built to accommodate an increasing population, forests, prairies, and wetlands have been destroyed. These natural habitats helped consume naturally occurring nutrients; forming a buffer against them entering the waterways. As native trees and plants disappeared, there was no longer a natural way to prevent these nutrients from entering our waterways. Not only have we seen the loss of natural buffer zones we have also seen an increase in the use of fertilizers in the farmlands and neighborhoods that were built in these locations, thus increasing the problem of too many nutrients entering the waterways.

Excess Nitrogen and Phosphate in Fertilizer

Although nutrients are a natural part of all ecosystems, they have never been so plentiful. As the Earth’s population has grown, it has been necessary to produce more food to sustain it. After World War I, technology, known as the Haber-Bosch process, was used to create fertilizers to produce enough food for a growing population. Today, 450 million metric tons of fertilizer are created each year. The fixed nitrogen in fertilizer does not need the natural process of bacteria to break it down for plants to use. In nature, nitrogen can only be broken down into a useable form in two ways – lightning and nitrogen-fixing bacteria. In the Nitrogen Cycle, nitrogen-fixing bacteria, which are found in soil and plant roots, convert nitrogen to a form that is accessible to plants. Humans and animals consume the plants, taking in the nitrogen they need. The fixed nitrogen in fertilizers bypass this natural process allowing excess nitrogen into the ecosystem. Since plants only use as much nitrogen as they need the excess nitrogen found in fertilizer is washed down storm drains and into our waterways where algae are waiting.

Phosphate is found naturally in some rocks and in various forms in soil, water, and sediment. It is an essential nutrient for plants and animals. It is a key component of ATP (adenosine triphosphate), DNA, lipids, and is critical for cell development. Insufficient amounts of phosphates lead to malnutrition in animals and deficient plant growth.
The natural phosphate cycle is slow and can take thousands of years. Rain and weathering breaks rocks and causes them to release phosphate ions. Eventually, phosphate becomes part of soil or water where plants absorb it; animals consume the plants and inside them phosphates become part of molecules like DNA and ATP. When the plant or animal dies, the phosphate becomes part of the soil again.

Humans invented processes to create artificial phosphate more quickly. Phosphate is treated with sulfuric acid to produce phosphoric acid which is a form that can be used in fertilizers. Like nitrogen, plants use only the amount of phosphate they need and the excess washes into waterways and the ocean where algae consume it.

Planting specific types of plants in areas where rainwater runs through a yard can reduce the amount of nutrients and sediment that enter the waterways. Phytoremediation is the act of using plants to remove nutrients and pollutants from the environment. Plants are solar-powered filtering systems that have the ability to absorb nutrients from the soil. Increasing the number of plants in our neighborhoods will help reestablish buffer zones between pollutants and our waterways.

Certain plants are better at removing contaminants than others. The plants included in the BaySavers Buffer Garden Kit are native to Tidewater Virginia and the East Coast of the United States. They are adapted to the climate and are tolerant of local soils and pests. These plants are perennials with large root systems, which consume nutrients all year round and help control erosion. They were carefully chosen to tolerate all types of growing conditions, including salty soils. As an added benefit these native plants also attract native wildlife. They support the local ecosystem by providing flowers and seeds for native species, including butterflies, birds, and other pollinators.

A buffer garden is a perennial garden that is built between homes and waterways and is an important way to reduce the flow of excess nutrients and pollutants that storm water runoff can carry into storm drains. Plants slow runoff and allow it to soak into the ground before it flows into storm drains. Using plants to buffer runoff goes a long way to protecting our local waterways. 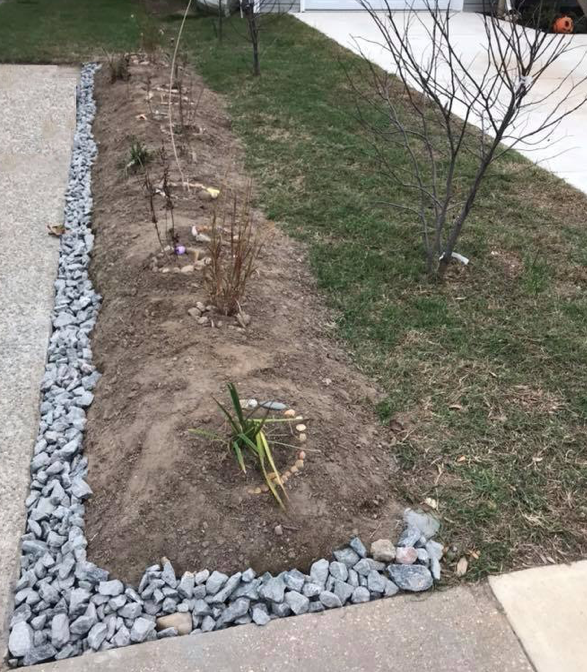 Below are the seeds for the plants we include.